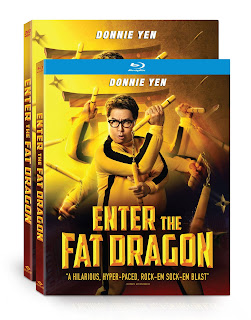 The film chronicles the events that transformed super-fit super-cop Fallon Zhu (Yen) into a records clerk with a major snack cake habit—and one shot to regain his job and his fiancée. A hilarious parody of Bruce Lee's 1972 film Way of the Dragon and a reimagining of the popular comedy martial arts film starring Sammo Hung, Enter the Fat Dragon was directed by Kenji Tanigaki (Legend of Seven Monks) and costars Teresa Mo (Hard Boiled), Niki Chow (Heavenly Mission) and Wong Jing (Kung Fu Mahjong).

Enter the Fat Dragon is a hilarious chronicle of the events that transformed super-fit super-cop Fallon Zhu (martial arts phenom Donnie Yen) into a glorified records clerk with a major snack cake habit. After a desperate request from an old colleague, Zhu teams up with a wily, wok-wielding restaurateur to solve a mysterious murder—and take his one last shot at regaining both his job and his fiancée.
Posted by Dr. Stan Glick at 3:15 PM