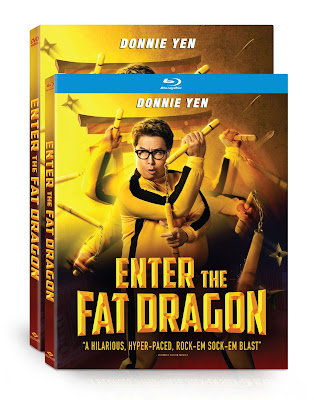 Enter the Fat Dragon, starring Donnie Yen (the Ip Man franchise & oh, so many other fine action films) debuts on Digital, Blu-ray™ and DVD today, July 14th from Well Go USA Entertainment. This review is based on watching the Blu-ray.

The film is a reimagining of the popular comedy martial arts film of the same name that starred Sammo Hung, which in turn derived it’s title from Bruce Lee’s ground-breaking Enter the Dragon (1973). This Enter the Fat Dragon was directed by Kenji Tanigaki (Legend of Seven Monks) and costars Teresa Mo (Hard Boiled), Niki Chow (Heavenly Mission) and Wong Jing (Kung Fu Mahjong).

Fallon Zhu (Yen) is a super-fit, by-the-books cop with a fiancée who’s a lovely aspiring actress. His over-enthusiasm at work results in him being demoted into a records clerk . On top of this, he’s dumped by his fiancée. As a result he develops a major snack cake habit and becomes most morbidly obese. A routine assignment escorting of a prisoner extradited to Japan goes wrong, providing Zhu an opportunity to redeem himself at work and in the eyes — and heart — of his fiancée.

Enter the Fat Dragon is a good film with some very fine stunts, lots of action, and some nice comedic touches.  Stick around during the end credits for a time-lapse segment of Donnie getting his “fat face” put on and for some outtakes.