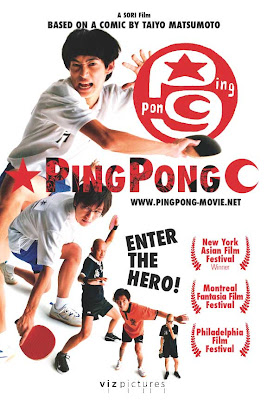 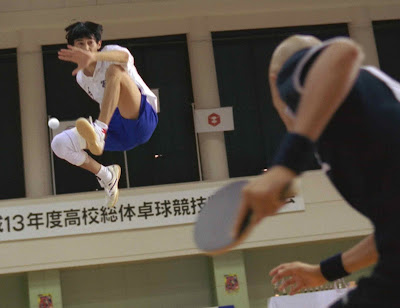 Peco gets some air! 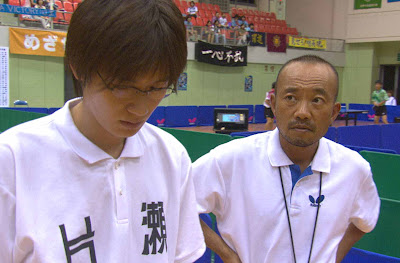 Smile and Coach Butterfly Joe
Hot on the heels of the theatrical release of the ping pong themed martial arts parody Balls of Fury comes the two disc DVD realease of Ping Pong, the delightful 2002 film based on the five volume manga by Taiyo Matsumoto.

The film focuses on two friends who play on the same high school team. Lively "Peco" Hoshino sports a bowl-cut hair style (actually a wig worn by actor Yosuke Kubozuka), loves snack foods, and wants to be the greatest ping pong player on the planet. Trouble is, he's kind of lazy and frequently cuts practice.

His best friend is the quiet, introverted, bespectacled "Smile" Tsukimoto (former model Araka). He got his moniker because smiling is something he just doesn't do; Peco can only remember him smiling once since he rescued Smile from some bullies years ago. Smile is extremely talented, but claims to play only to kill time. He often doesn't play his best because he's sensitive to his opponents' feelings about being defeated.

These two have three main opponents from different schools. One is "China" (Sam Lee), who couldn't make the Chinese national team, so he came to Japan to play. He often provides knowledgeable commentary about the matches being played by the others.

The other two play for yet another school, one whose members all shave their heads. The captain of this team is "Dragon" (Shidou Nakamura, whose background is in Kabuki), who takes the game super seriously. "Demon" (Koji Ohkura) has known Peco and Smile for years.

Two other characters round out the main cast. Peco and Smile's school coach, "Butterfly" Joe, is played by Naoto Takenaka, who I first saw in A Night In Nude, but who is probably best known for his performance in the original version of Shall We Dance. Mari Natsuki (who to me looks a bit like a Japanese Helena Bonham Carter) plays "Granny"; she runs a ping pong establishment and takes Peco under her tutelage.

Fumihiko Sori specialized in Computer Graphics (he worked on James Cameron's Titanic) before undertaking this, his first directorial project He wanted to use his experience in CGI, but wound up using it even more than he initially planned.

This came about because he discovered that sometimes when using a real ping pong ball, the actors concentrated on the play and couldn't give him the facial expressions that he was after. To Sori, and his crew's credit, it's all but impossible to distinguish between actual ping pong balls and the CGI ones. Only in one scene, where several games are going on simultaneously and the players are each hitting in the same "one-two' rhythym, is it obviously CGI that we're watching.

Ping Pong won the Audience Award at the 2003 New York Asian Film Festival, an indication of its broad appeal. Hey, I'm a middle-aged white guy who's only played extremely casual ping pong, and the last time I did that was many years ago. But I've watched the film twice, and got caught up in the characters and the story both times.

Ping Pong has an interesting story about friendship and competition that isn't the least bit "preachy." The film is both comic and touching, great entertainment. And VIZ Pictures, which is putting out the DVD, has done fans a great service. Rarely are we treated to a two-disc release with lots of worthwile extras, as we are here. Thanks, VIZ!

For both the film itself and the extras packaged with it, Ping Pong gets a 3.5 out of 4 star ACF rating [Highly recommended].