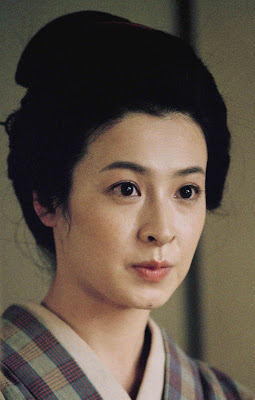 Actress Rei Dan portrays Kayo, the wife of a low level samurai
Love and Honor / Bushi no ichibun
Directed by Yoji Yamada
Japan, 2006, color, 121 minutes
Veteran director Yoji Yamada's Love and Honor, the third film in his samurai trilogy, will have an exclusive one week engagement at The ImaginAsian theater in New York starting on Friday, November 2, 2007. The first film in this series was The Twilight Samurai (2002), the story of a widowed samurai whose love of his two young daughters leads to him being mocked by his peers, at least until he is called upon to perform a dangerous service for his clan. Next came The Hidden Blade (2004), in which a samurai must kill an escaped prisoner who was a close friend and a fellow student of the same sword master.

In Love and Honor, Shinnojo Mimura (Takuya Kimura) is one of the samurai assigned to taste food prepared for his lord to insure that it is safe. He tells his wife Kayo (Rei Dan, in her first film) that he regards the job as meaningless, since it's inconceivable that an attempt to poison his lord would ever be made. However, an error in food preparation results in Shinnojo becoming deathly ill. He recovers but has lost his sight. Since there's nothing as useless as a samurai who cannot see, he stands to lose most, if not all, of his rice stipend.

His relatives are unwilling to support him and his wife. They urge Kayo to approach Toya Shimada, the clan's head clerk, and try to get him to speak on her husband's behalf to his lord. She is reluctant because she knows that Shimada wants her body in exchange for his efforts, but goes to him because it seems the only way to provide for her husband.

After his aunt informs him that there are rumors that Kayo has taken a lover, Shinnojo has her followed and learns of her secretive meetings with Shimada. In anger and despair, he divorces Kayo and, though blind, resolutely sets off on a path to achieve revenge by challenging Shimada to a duel.

Director Yamada, who was born in 1931, is best known for directing over forty of the popular Tora-san series of films. Thus it was somewhat surprising when, at over seventy years of age, he directed The Twilight Samurai, his first period film. It, along with The Hidden Blade and now Love and Honor, share certain characteristics:

- Each is based on a novel by Shuhei Fujisawa
- Each concerns a low level samurai of high principles
- Each includes a sub-plot concerned with the obstacles that arise between the samurai and his beloved
- Each culminates in a gripping one-on-one sword fight
- Each film is a beautiful, delicate gem

Yamada's approach to a samurai film is almost the antithesis of Akira Kurosawa's, but in it's delicacy and small scale, it's every bit as compelling. And though Shinnojo is no Zatoichi, he's perhaps more relevant and believable because he's more real.

If you're in New York and can, get yourself over to The ImaginAsian and catch this wonderful film by one of Japan's master directors. If you're elsewhere or can't make it to one of the shows during the week long run here, look for it elsewhere or on DVD.

For further info about Love and Honor at the ImaginAsian, click here.

For the official Love and Honor website (in Japanese only), click here.
Posted by Dr. Stan Glick at 3:41 PM