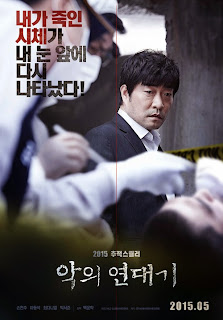 The Chronicles of Evil / Akeui Yeondaegi
Written and Directed by BAEK Woon-hak
South Korea, 2015, 102 minutes
In Korean with English subtitles

Chronicles of Evil, a terrific action thriller, opens in North American theaters today Friday, May 22nd. It can be seen Los Angeles, New York, Chicago, Dallas, Seattle, Vancouver, Toronto and other cities. The full theater list can be found here.

SON Hyun-joo (The Chaser, Three Days) stars as homicide police chief CHOI Chang-si. A talented officer who has served in homicide for fifteen year, he is rumored to soon receive a promotion and be assigned to Headquarters.

His men, including veteran Detective OH (MA Dong-seok, (The Good, the Bad, and the Weird, The Unjust)) and young officer CHA Dong-Jae (PARK Seo-joon, Witch’s Romance). take him out for an evening of drink and celebration. On his way home, an attempt is made on his life. However it's the assailant who ends up dead, not CHOI. Concerned that the incident will jeopardize his promotion, CHOI tries to cover up his involvement. But the death is revealed in a very public way that is extremely embarrassing to the police department. CHOI is assigned to lead the investigation, which is given highest priority.


CHOI is thus faced with the unenviable task of closing the case without revealing his involvement. The situation gets more and more complicated until a deftly handled series of reveals brings the full story into the open, at least for the viewing audience.

Chronicles of Evil is a smart and engrossing tale that kept this reviewer guessing just what was going on and why until the ending. It's a deeply satisfying movie that's more than well worth seeing in a theater.

AsianCineFest Rating: 3.5 out of 4 stars; very highly recommended
Posted by Dr. Stan Glick at 1:00 AM