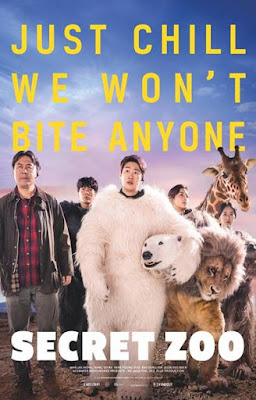 
Based on the webcomic series Haechijiana by Hun that ran from 9/20/2011 - 4/27/2012, Secret Zoo is a charming and delightful comedy about a zoo struggling to stay afloat. The film is playing as part of the New York Asian Film Festival (NYAFF), which this year is running online only from August 28th to September 12th. Secret Zoo, like two other offerings, will only have two screenings: Saturday, September 5 at 8:00 PM and Tuesday, September 8 at 5:00 PM. My review is based on watching an online screener back in January, 2020, in conjunction with the film's theatrical opening in the U.S.A. that month.

KANG Tae-soo (AHN Jae-Hong) is a young lawyer who has worked as a temp at JH Law for eight months and fervently wants to secure a permanent position in the firm's Mergers and Acquisition (M & A) department. It looks like his opportunity has arrived when he is tasked with normalizing and maintaining the failing Dongsan Park Zoo within three months for one of his employer's clients. The trouble is, all the viable animals have been sold off by loan sharks to pay the zoo's debts!

Undeterred, Tae-soo comes up with a plan to used somewhat realistic-looking animal costumes for the four remaining members of the staff to wear and fool the public. Not surprisingly, things don't go well; until, that is, a chance event goes viral on the internet and transforms the zoo into a major attraction.

Given the nature of the genre, one knows that things are basically going to turn out alright at film's end. It's really a matter of how convincing the rather outlandish premise is depicted and how interesting the twists and turns are. On all these accounts, the film succeeds admirably.

The official movie trailer is available at https://youtu.be/WPdCjA2Gfys.

Also, a February 4, 2020, interview with director SON Jae-Gon at KoBiz can be found here.