THE LEGEND OF TOMIRIS reviewed 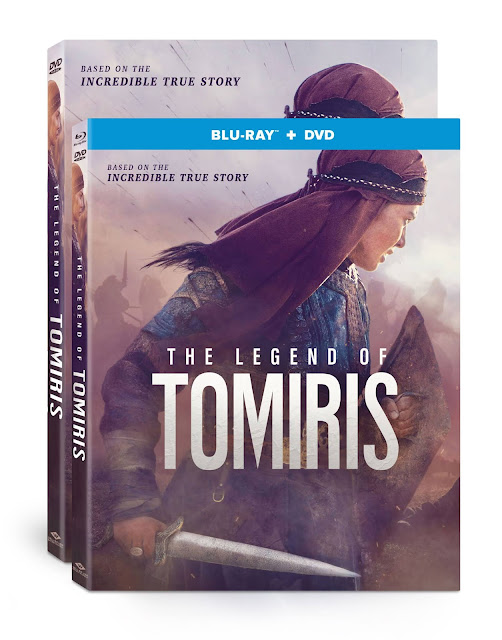 The Legend Of Tomiris
Directed by Alan Satayev
Kazakhstan, 2019, 155 minutes

The Legend Of Tomiris is an epic drama about one of the world's first female warlords. It debuts on Digital, Blu-ray™ and DVD tomorrow, Tuesday, September 29th, from Well Go USA Entertainment. My review is based on watching the Blu-ray version.

Tomiris was a daughter of Spargap, the leader of the Massagetae, one of the pastoral-nomadic tribes in the steppe of Central Asia. He taught her to be brave, fearless, and smart when she was a young girl. These values would serve her well after two members of the tribe overthrew Spargap in a coup following a dispute over relations with another people.

Taken to safety by a group loyal to her father, Tomiris, continued to train as a warrior. As an adult (now played by actress Almira Tursyn), she joins the Savromat tribe, whose female warriors were sort of 6th century BCE Central Asian Amazonians. With their aid, she returns to avenge her father and family and to claim leadership of the Massagetae. Her skills as a uniter of the Scythian and Saka tribes and as a military strategist are tested to their fullest when Cyrus, the founder and first king of the Persian empire, brings his troops east to expand his empire

Western audiences are not often treated to films from Central Asia in general and Kazakhstan in particular. This film is a most welcome addition to that limited group. Aside from some iffy CGI during a hunt early on, it is well done and flows nicely during its over one-and-a-half-hour running time. There's plenty of action on hand, and for  the most part its fairly easy to tell who's fighting who.

As a fan of Zena: Warrior Princess, the television show that starred Lucy Lawless in the title role and that ran for six seasons from 1996 - 2002, I especially enjoyed this historical action-drama based on a real life warrior princess (and later Queen).

AsianCineFest Rating: 3.0 out of 4 stars; a solid historical action film from Cental Asia.

For the Wikipedia entry about Tomiris (spelled there as Tomyris, one of a number of alternate spellings), click here.