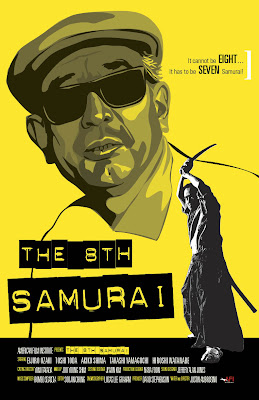 From the poster art shown above, which came with the DVD screener I received, and from the title of this short, I expected a documentary about Akira Kurosawa that would informally regard him as The 8th Samurai. Such turned out not to be the case. While it is an homage to Kurosawa and to Seven Samurai, one of his greatest masterpieces, Ambrosino's film tells the little known (because it's fictitious) tale of Nanshu (Eijiro Ozaki) who was originally slated to be the 8th samurai. He was certain that this would be the big break his career sorely needed.


Unfortunately for him, The Director (Toshi Toda) had a dream that convinced him that there should be only seven samurai. Who will be cut from among the lead roles and how will this be determined? Will Nanshu be able to fulfill his promise to his mother's ghost that he will gain fame and recognition as an actor, or will a lesser fate befall him?

This is my sixth review of films showing in the Japan CineFest: Short Film Program, and I've seen and will soon review the seventh film, Together: Dancing with Spinner Dolphins. While I've very much enjoyed all of the films, some certainly more than others, The 8th Samurai is far and away my favorite. Partially this is due to the subject matter, as I'm a huge fan of Kurosawa and of Seven Samurai. Also I love the conceit of one of world cinema's greatest films becoming what we know it as because of a  dream the director had. Finally, I'm flabbergasted by how much Toda is made to resemble Kurosawa (see image below). The clothing, glasses and hat are perfect, although the look may actually be that of Kurosawa in years later than when Seven Samurai was being shot.


While I haven't generally been assigning star ratings to the short films in this program, I must in this case. The 8th Samurai gets an ACF Rating of 4 out of 4 stars; excellent, outstanding, superlative, and most highly recommended.

The 8th Samurai  toured with the Akira Kurosawa 100th Anniversary Tour. It has received the following awards:

Click here for information about The 8th Samurai and the other films in the Japan CineFest: Short Film Program, a co-presentation of Asia Society and Mar Creation, Inc.
Posted by Dr. Stan Glick at 4:00 AM