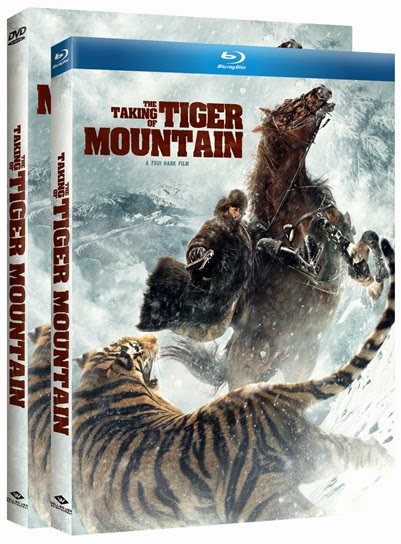 The film, set in the late 1940s, finds the fates of three individuals -- a bandit warrior, the leader of a liberation army and an investigator on a clandestine mission -- intertwined. As the action unfolds, audiences are immersed in the “swooping camera, spurting blood, flying bullets, airborne knives, falling rocks, cannon fire and — most spectacularly — a covert raid by ski” (Ben Kenigsberg, The New York Times).

Synopsis:
Tsui Hark’s thrilling adaptation of Qu Bo’s beloved adventure novel stars Tony LEUNG Ka-fai as a ruthless bandit, ruling the lands of Northeast China from his fortress on Tiger Mountain. A captain of the Liberation Army (LIN Gengxin) launches a counter-insurgency against the dictator with a skilled investigator (ZHANG Hanyu) sent to destroy the gang from the inside.

I've already placed my request for a screener, so look for a review here at AsianCineFest on or shortly before the June 2nd home video release date.
Posted by Dr. Stan Glick at 1:30 AM