VENGEANCE OF AN ASSASSIN 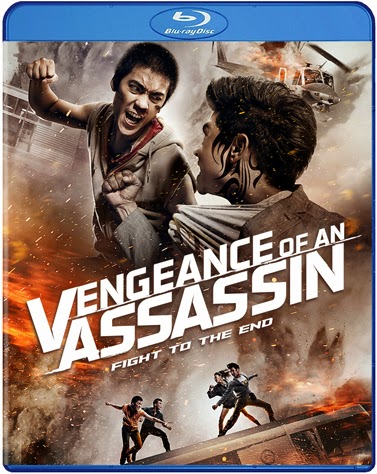 Vengeance of an Assassin  is the last film that Panna Rittikrai directed before his untimely death in July 2014 at the age of 53. It debuts on Blu-ray™, DVD and digital tomorrow April 14th from Well Go USA Entertainment. This review is based on the Blu-ray version.

The assassin of the title is Thee (Dan Chupong, who also starred in Rittikrai's Born to Fight, 2004). The vengeance he seeks is for the murder of his parents by unknown parties. To discover their identities, he becomes a paid assassin. However, for one assignment he is hired to protect Ploy, a young actress with dyed blonde hair who is the granddaughter of a powerful individual. In reality, Thee has been set up to take the fall for  Ploy's murder, as she's the target of others.

This brief description gives you all you need to know about the story. The screenplay itself is a mess, with gaps and lapses in narrative that are beyond belief. It's as if it was the first draft written by an untalented undergraduate film student. Some of the emotional scenes, which I assume were intended to be touching, are embarrassing. There's no screenwriting credit for the film at IMDb and the lettering on the Blu-ray sleeve is too small for my old eyes to make out, even using a magnifying glass.

Of course the main thing in this kind of film is how good the action is, and on that count the film really delivers. The opening sequence is a full contact soccer match in a huge factory warehouse. My favorite though was a weapons sequence that takes place in a similar environment. Obviously shot using a steadicam, the scene involves Thee as he advances through the space, blowing away enemies right and left. Sometimes it's as if we're watching from his point of view, as in a first-person video game, sometimes, the camera is behind him, like a third-person shooter, and sometimes it moves to the side, providing an objective view. This extended sequence is truly awesome.

The film also has the distinction of providing what surely must be the only case of a locomotive taking out an air-born vehicle! It's so far-fetched that you just have to smile and enjoy it for what it is. Unfortunately the CGI involved here, and elsewhere at times, is not top drawer.

The only "extras" are the trailer for the film and those for three "preview" offerings from Well Go.

It's a shame that the story line is so underdeveloped and incoherent. But if you come for the action you won't be disappointed.

AsianCIneFest Rating: one out of 4 stars for the story (poor); 3.5 out of 4 for the action (very, very good overall).

The ending clearly allows for a sequel, but personally I doubt that one will be made.
Posted by Dr. Stan Glick at 12:52 PM