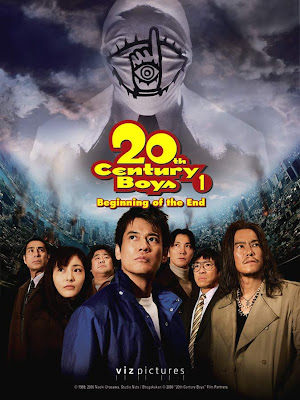 Critically Acclaimed Movies Based On Smash Hit Manga Series Created By
Naoki Urasawa To Open New VIZ Cinema In August
VIZ Pictures, an affiliate of VIZ Media, LLC that focuses on Japanese live-action film distribution, has announced that it has licensed from Nippon Television (NTV) the North American theatrical and DVD distribution rights to the live-action 20th CENTURY BOYS feature film trilogy from Japan. The films are based on the critically acclaimed 20th CENTURY BOYS manga series created by Naoki Urasawa, which is a national phenomenon in Japan, selling over 20 million copies to date.

VIZ Pictures is scheduled to release the first and second chapters of 20th CENTURY BOYS films on DVD later this year, with the remaining film scheduled for release in 2010. VIZ Media publishes the 20th CENTURY BOYS manga series (rated ‘T+’ for older teens) in North America and will also distribute the DVDs. For more information about these DVD releases, please stay tuned at http://www.viz-pictures.com/.

On August 15th, VIZ Cinema will celebrate its grand opening at NEW PEOPLE, located at 1746 Post Street in San Francisco, with a very special screening of the first chapter of the 20th CENTURY BOYS live-action trilogy, presented in partnership with Nippon Television. Advance tickets go on-sale on Friday, July 31st and more information is available at http://www.vizcinema.com/.

The first 20th CENTURY BOYS film will continue playing at VIZ Cinema for the next week, followed by a week-long showing of the second chapter of the trilogy. As an unprecedented event in the Japanese film world, VIZ Cinema will host the world premiere of the third and final chapter of 20th CENTURY BOYS on August 28th, presented simultaneously with the national release in Japan.

The 20th CENTURY BOYS saga was directed by Yukihiko Tsutsumi (HAPPILY EVER AFTER, also available from VIZ Pictures) and begins in 1969 when a young boy named Kenji and his friends write “The Book of Prophecy.” In their book, they write about a future where they fight against an evil organization trying to take over the world and bring about Doomsday.

Years later in 1997, a mysterious cult being lead by a man only known as “Friend” has emerged and gained strong influence over society. A series of catastrophic events begin to occur, mirroring the prophecies made up by the young Kenji. The greatest fear is that the climax of The Book of Prophecy will become a reality: on December 31st, 2000, a terrifying giant virus-spreading robot will attack the entire city of Tokyo, leading to the end of mankind. The only people who know about The Book are Kenji and his childhood friends. Who is Friend? Will Kenji and his friends are able to save mankind and live to see the 21st Century?

“We are truly honored to announce the license for 20th CENTURY BOYS features and look forward to premiering the films at our new VIZ Cinema later this summer,” says Seiji Horibuchi, President and CEO of VIZ Pictures. “20th CENTURY BOYS was one of the biggest productions ever attempted in the Japanese movie industry and was created in-part to celebrate Nippon Television’s 55th Anniversary. Anticipation has risen steadily in Japan in the wake of the success of the first two films and since the upcoming release of the final film of the series was announced. We’re very excited to premiere the third and final film to U.S. audiences at VIZ Cinema the same day it debuts in Japan.”
Posted by Dr. Stan Glick at 6:15 AM