ACF 347: VIZ to publish series of new releases based on Miyazaki's Ponyo 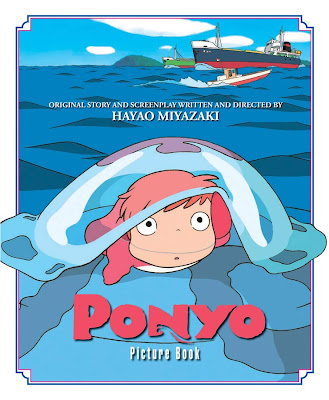 To support the release, VIZ Media will offer the official 4-volume full-color PONYO Film Comic, a PONYO Picture Book, and THE ART OF PONYO, which presents a comprehensive collection of original art, sketches, character designs and storyboards from the film. Walt Disney Studios will release PONYO throughout North America on August 14, 2009.

PONYO is a wondrously imaginative retelling of the timeless Hans Christian Andersen’s fairy tale “The Little Mermaid,” and offers the adventures of little fish-girl named Ponyo, whose father happens to be a great sorcerer of the seas. Trapped in a jar during one of her escapades, she washes ashore where five-year-old Sosuke releases her and renames her Ponyo. In an effort to stay close to her new friend, Ponyo tries to transform herself into a human, causing a great imbalance between their two worlds. A subtle message of the unfathomable threads that connect all forms of life is woven artfully throughout this enchanting film.

The colorful and easy-to-read PONYO on the Cliff by the Sea Picture Book is a fabulous hardcover edition that will appeal especially to younger readers. The book uses the vividly colored animation cel art from the feature film combined with simplified text to retell the story of Ponyo and her adventures in the human world.

A comprehensive soft cover edition that features striking watercolor and pastel concept sketches and layout pages from the film, as well as interviews with production principals and the complete screenplay to give an inside look at the entire creative process behind PONYO.

“Hayao Miyazaki is without question Japan’s most celebrated animation director, and we are privileged and extremely excited to announce the release of this new collection of titles in support of his newest film, PONYO,” says Gozalo Ferreyra, Vice President Sales & Marketing, VIZ Media. “The film garnered rave reviews and grossed more than $165 million during its initial theatrical run in Japan, making it that country’s highest grossing movie for 2008. In an age of computer graphics, Miyazaki made a very bold choice to animate this film by hand. As domestic audiences have come to know and love this creative visionary, we look forward to them discovering PONYO and this new collection of impressive releases from VIZ Media!”

Hayao Miyazaki is one of Japan's most beloved animation directors. In September 2005 he was awarded the Venice International Film Festival's prestigious Golden Lion Award for Lifetime Achievement and his animation company, Studio Ghibli, also received the Festival's Osella Award for overall achievement in 2004. Miyazaki's films include SPIRITED AWAY, winner of the 2002 Academy Award® for Best Animated Feature Film, as well as PRINCESS MONONOKE, MY NEIGHBOR TOTORO and HOWL’S MOVING CASTLE, all of which have received tremendous international acclaim. Miyazaki's other achievements include the highly regarded manga series NAUSICAÄ OF THE VALLEY OF THE WIND, which is also published in English by VIZ Media.