ACF 344: Oishinbo: Fish, Sushi & Sashami is due out today from VIZ! 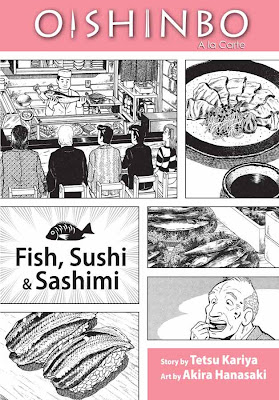 The latest volume of Oishinbo a la Carte is due out today from VIZ, and it focuses on fish, sushi and sashimi. Like previous volumes, it's a highlight compilation from the original 100+ volume series. The story is by Tetsu Kariya and art by Akira Hanasaki. The MSRP is $12.99 U.S. and $15.00 Canadian.

In this installment, journalist Yamaoka Shiro continues his quest to develop the "Ultimate Menu" as part of the 100th anniversary of the Tozai News, the paper for which he works. His partner is the lovely and sweet Kurita Yuko, and his nemesis remains Kaibara Yuzan, a prominent artist and gourmand who happens to be Shiro's father.

The story line remains interesting, and the 250+ page volume is chock full of fascinating information about food and its preparation. The first volume of Oishinbo (which means "The Gourmet") was - and it remains - one of my favorite manga books. This is the second volume I've had a chance to read in advance of it going on sale, and I'm even more enthusiastic about the series than before. I just wish I could fly off to Japan and indulge myself in all the fantastic dishes that are so lovingly described in words and beautifully depicted in images.

One of the nice touches in the series as published by VIZ is the inclusion of several pages of notes on the text at the end of the book. These notes explicate points that would not be recognized by non-Japanese - and perhaps some Japanese as well! - and also keep the reader informed about important developments that took place in material not included in this edited version. In this volume, for example, one of the end notes explains an important event that has taken place in the relationship between Shiro and Yuko.

If you love food, Japanese culture, or just terrific manga, the Oishinbo series is a must have. I give Oishinbo: Fish, Sushi & Sasimi an ACF rating of 4 out of 4 stars - highest recommendation. My mouth is already drooling in anticipation of the next volume, which focuses on vegetables and is scheduled to be available in September, 2009. Yum!