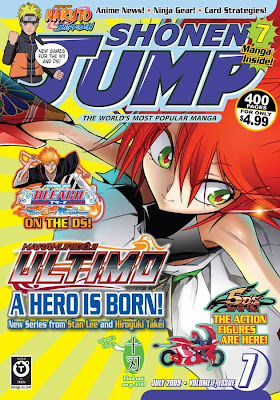 The pair will appear at the nation’s largest comic book and science fiction convention to celebrate their historic creative collaboration for the ULTIMO manga series (KARAKURIDÔJI ULTIMO), which debuted in the July 2009 issue of VIZ Media’s SHONEN JUMP magazine.

Stan Lee and Hiroyuki Takei will be welcomed as special guests at the SHONEN JUMP panel, scheduled for Friday, July 24th from 10:30-11:30 a.m. in Room 10. Lee and Takei will also appear together in VIZ Media’s Booth #2813 on the main show floor for an exclusive autograph session on Friday July 24th from 2:15-3:15 p.m. The first 40 fans to purchase the July issue of SHONEN JUMP magazine featuring ULTIMO from the VIZ Media retail area each day from Wednesday through Friday will receive a ticket to have their issue personally autographed by Lee and Takei.

ULTIMO represents an innovative and historic collaboration between comics legend Stan Lee, co-creator of many iconic superheroes including Spider-Man™, the Fantastic Four™, and the X-Men™, and Hiroyuki Takei, the creator of the popular SHAMAN KING manga series, published in Japan by Shueisha and in North America by VIZ Media.

The ULTIMO back-story: High above Farmless City, citizens are stunned by the sudden appearance of two floating figures. Are they human boys, monolithic robots, or something much more strange? As the battle ensues between them, destruction and devastation falls on the hapless city. One figure is Vice, and seems to be as evil as his name implies. The other is Ultimo, intent on trying to stop Vice from wreaking more havoc. But who are Vice and Ultimo really? Where did they come from? Find out in the first chapter of ULTIMO!

For over half a century, Stan Lee has been synonymous with superhero comics. In addition to co-creating countless memorable series and characters, including Spider-Man™, the Incredible Hulk™, and Daredevil™, he served as the former president and chairman of Marvel Comics. Lee remains a hugely respected and dynamic figure in the entertainment industry and continues to develop a variety of film, television and video game properties.

Unconventional author/artist Hiroyuki Takei began his career by winning the coveted Hop Step Award (for new manga artists) and the Osamu Tezuka Award. After working as an assistant to famed artist Nobuhiro Watsuki (RUROUNI KENSHIN), Takei debuted in Weekly Shonen Jump in 1997 with Butsu Zone, an action series based on Buddhist mythology. His multicultural adventure manga series SHAMAN KING debuted in Japan in 1998 and has been adapted into a popular animated television series. The SHAMAN KING manga series is published in North America by VIZ Media and has sold more than 400,000 copies in the U.S. to-date; for many years it was also serialized in English in VIZ Media’s SHONEN JUMP magazine.

“We are extremely honored to host two creative luminaries as huge as Stan Lee and Hiroyuki Takei to Comic-Con this year,” says Grant Lowery, SHONEN JUMP Editor-In-Chief. “Their groundbreaking new collaboration, ULTIMO, is an exciting, action-packed story that blends the best attributes of the Western and Eastern comic book and manga traditions. This is a once in a lifetime opportunity and we look forward to welcoming visitors to this year’s Comic-Con which promises to be the most exciting one yet!”

Lee’s own company, POW! Entertainment (Pinksheets: POWN.PK), worked with VIZ Media parent company Shueisha, and with JEA and Dream Ranch to facilitate the development of ULTIMO.

For more information on ULTIMO, SHONEN JUMP and VIZ Media please visit www.shonenjump.com or www.viz.com and on TWITTER: VIZ-Media
Posted by Dr. Stan Glick at 1:31 AM