ACF 1121: Miyuki Miyabe's "Ico: Castle in the Mist" to be available August 16th from VIZ 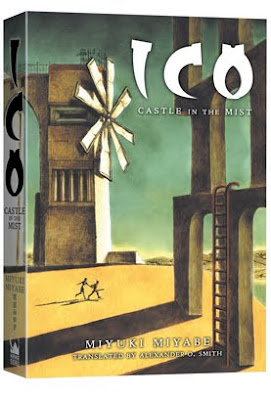 HIGH FANTASY AND TRUE LOVE COME TO LIFE IN
ICO: CASTLE IN THE MIST

New Novel Is Based On A Popular Japanese Video Game
From The Acclaimed Author Of BRAVE STORY
VIZ Media will publish author Miyuki Miyabe imaginative fantasy novel ICO: CASTLE IN THE MIST, on August 16th. The new book will be published by the company’s Haikasoru imprint and will carry an MSRP of $15.99 U.S. / $18.99 CAN.

A boy with horns, marked for death; A girl who sleeps in a cage of iron.

The Castle of the Mist calls for its sacrifice: a horned child, born once a generation. When, on a single night in his thirteenth year, Ico's horns grow long and curved, he knows his time has come. But why does the Castle of the Mist demand this offering, and can the castle keep Ico's destiny from intertwining with that of the girl imprisoned within its walls?

“ICO: CASTLE IN THE MIST first appeared as a popular videogame for the PlayStation 2 and will soon to be re-mastered in high-definition for the PlayStation 3,” says Nick Mamatas, Haikasoru’s Editor. “Award winning author Miyuki Miyabe was inspired by the game’s atmosphere and expands the story in her novel, creating a whole world for readers to explore. Delve into the mysteries of this talented author’s grand achievement of imagination in this new release from Haikasoru!”

Author Miyuki Miyabe's first novel was published in 1987, and since then she has become one of Japan's most popular and best-selling authors. Miyabe's novel, BRAVE STORY (also published North America in 2007 by VIZ Media and Haikasoru), won The Batchelder Award for Best Children's Book in Translation from the American Library Association. ICO: CASTLE IN THE MIST is her seventh novel to be translated into English.

For more information on ICO: CASTLE IN THE MIST and the Haikasoru imprint, please visit www.haikasoru.com.
Posted by Dr. Stan Glick at 12:01 AM