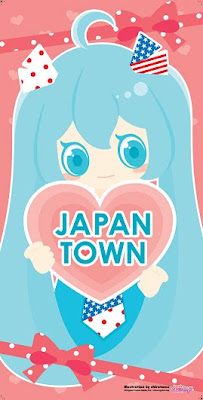 NEW PEOPLE, San Francisco’s dynamic entertainment destination showcasing the latest examples of Japanese popular culture, and the San Francisco Japantown Merchants Association have announced the winning banner design inspired by Hatsune Miku and carrying the theme of “Hope for Japan’s Recovery.” It will be displayed in the city’s Japantown and throughout the upcoming J-Pop Summit Festival. The design contest was a special collaboration with Crypton Future Media, Inc., the creators of Hatsune Miku.

The banner went up on Post Street, the main Japantown thoroughfare where the upcoming J-Pop Summit Festival is set take place on Saturday and Sunday, August 27th and 28th. With the recent earthquake and tsunami tragedies in Japan still fresh in everyone’s minds, the J-Pop Summit Festival has incorporated multiple benefit events into this year’s programming.

The “Hope for Japan’s Recovery” banner design was created by shiratama, an artist from Japan, and depicts a whimsical character inspired by the striking, blue-haired Vocaloid pop music phenomenon Hatsune Miku. This design will be featured on t-shirts, USB flash cards, tote bags and coffee mugs that will be for sale as part of charity programs during the J-Pop Summit Festival. A variety of shiratama’s other creations are available to view at: http://piapro.jp/ssmsub.

“We would like to send our sincerest appreciation and applause to shiratama, who designed this banner filled with love featuring Hatsune Miku holding a warm heart tightly, which delivers a message of hope from us to the people in Japan,” says Richard Hashimoto, President of the Japantown Merchants Association. “We would also like to thank the many artists who entered this contest from all over the world. Please come visit San Francisco’s Japantown to see Miku praying for Japan.”

“It’s a pleasant coincidence for us to have this banner up during the week of our second anniversary of NEW PEOPLE.” Seiji Horibuchi, the founder/CEO of NEW PEOPLE Inc, which produces the J-Pop Summit Festival. “We’re grateful to Hatsune Miku and Crypton Future Media to give the 2011 J-Pop Summit and Japantown an exciting opportunity to strengthen the bridge between the U.S. and Japan.”